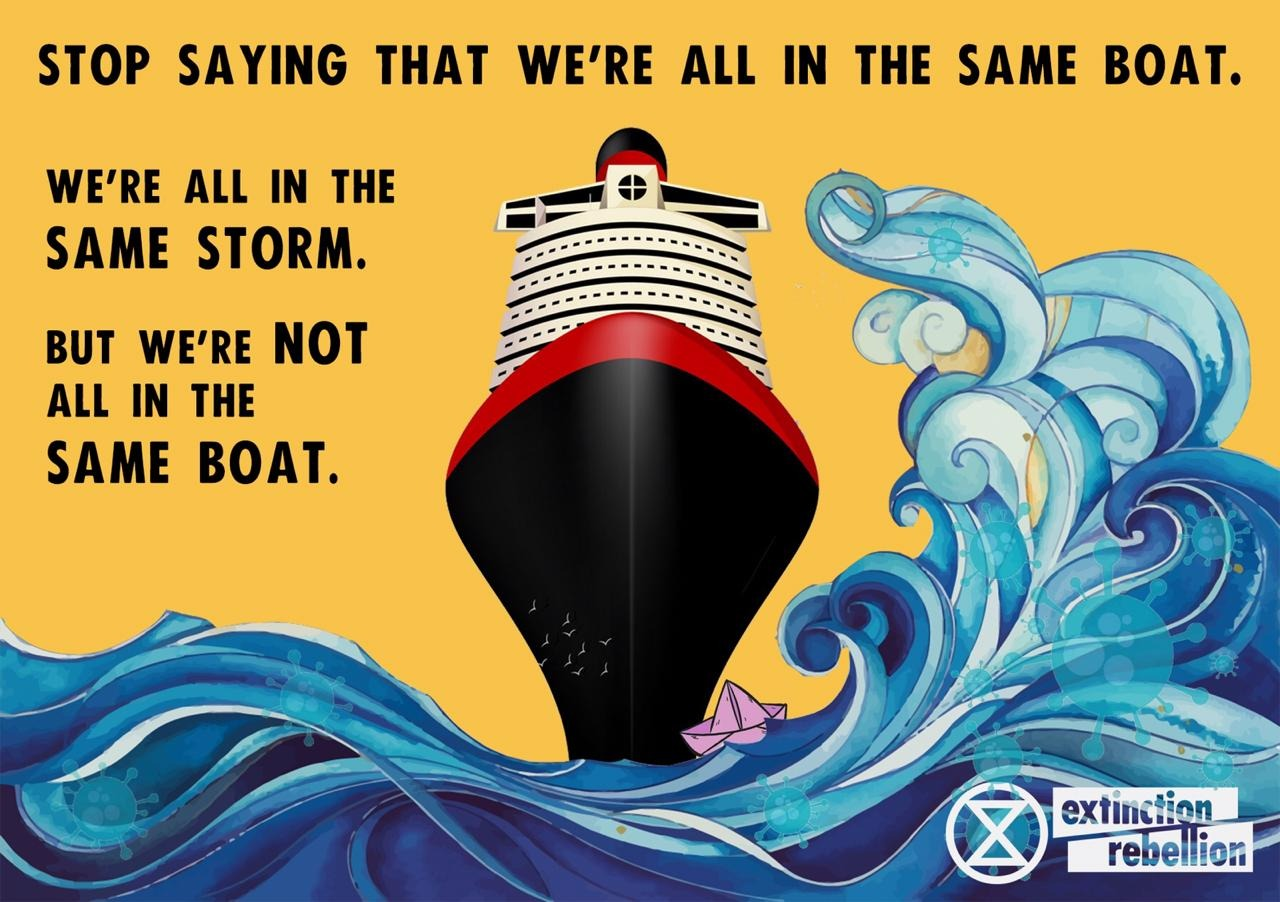 Many countries may now be coming out of quarantine, but the world is still sick. Now, more than ever, it’s time to rebel.

The last few weeks have seen a near-endless parade of atrocities which only serve to highlight the injustices and social inequalities of our time. This statement from XRISN focuses on the need for XR to be an ‘umbrella canopy’ with diversity and freedom at its core. Ultimately, it is our duty as rebels (and as human beings) to work toward making the world a safer, fairer, and greener place.

Yet amid all the sadness and tumult, there are some bright things happening. Have you seen The Gigantic Change, featuring the wonderful Whoopi Goldberg? How about The Condor & The Eagle; a fresh new documentary bringing Indigenous voices to the forefront of our narrative? Also, we have news of upcoming actions in Europe and ongoing ones in India.

Today’s focus is on rebel activities in Kenya, where XR Africa is fighting to halt the destruction of a precious wild space, the Nairobi National Park, which is under threat from a luxury tourist resort in direct violation of the 2030 National Wildlife Strategy. Read up below, and also – exciting news, XR Africa now has their very own newsletter. Read it here and please subscribe!

In Indonesia we catch up with a group of rebels who staged a successful and inspiring digital rebellion, in response to the underhand tactics of its parliament to pass a secretive Coal and Mineral Mining Bill. And in France, over 50 rebels were arrested in one day of peaceful, socially distanced protesting for greater focus on our planet’s needs.

Be sure to check out the Unchained for an array of more brave and beautiful actions from across the globe.

Our announcements section is bursting with ways to educate yourself and get involved, whether that’s helping out with the new website redesign or sending stories to the Writers Rebel or Creative Hub.

Finally, as we come tentatively out of lockdown and into the next stage of unknown, the only certainty is that we won’t give up rebelling for the Earth, for all life, and for justice.

This Rebellion needs your support. If you can’t give time, consider giving money.

Nairobi National Park is under threat. The park is a rare haven for wildlife in a busy city; the world’s only natural wildlife park in the midst of a capital. It is home to Kenya’s only black rhino sanctuary, as well as lions, buffalos and over 400 bird species.

The park also functions as an important carbon sink helping to purify the air in a city where air pollution costs many lives.

Part of a vital migration route to plains beyond it, the park was once a channel for the mass migrations of zebras, wildebeests and giraffes. But with the development of oil pipelines, railways, roads and extensive fencing, the number and variety of wild species populating the park has fallen drastically.

The park is now threatened by further developments, including a luxury tourist resort in rhino breeding grounds and a plan to fully enclose the park. These proposals contradict the 2030 National Wildlife Strategy recently adopted by the government which aims to sustain natural habitats and reduce biodiversity loss.

A founder of the African Sustainability Network and fierce defender of the park explained: “Utter destruction will occur if this goes ahead, converting the park into nothing more than a glorified zoo… Ancestral lands and wildlife diversity will be diminished through inbreeding, territorial reduction, culling and habitat encroachment.”

These developments must be stopped. Watch this video, sign the petition, support their legal crowdfunder here and follow XR Youth Kenya here

XR Indonesia hosted a 10-day wave of digital actions that spread awareness of the climate emergency and recruited hundreds of new rebels to their cause.

Each day a new digital ‘quest’ was launched on Instagram – a climate-related challenge that included attending zoom seminars, answering questionnaires, and making pieces of protest artwork. You can watch some highlights here.

The quests drew in thousands of Indonesians, with hundreds posting their responses each day. Many of the new recruits are school age and are now setting up a national XR Youth chapter, as well as filming their own ‘Heading for Extinction’ talk.

The digital event was launched after the government held an extraordinary parliamentary session, in contravention of its own lockdown rules, to pass a secretive Coal and Mineral Mining Bill.

This year the country has been devastated by floods and forest fires. Yet the media continues to ignore the climate crisis, and most Indonesians are still not properly informed about the wider links.

58 French rebels were arrested, bussed to a police station, and fined after blocking the most iconic street in Paris, the Champs-Elysees. Many more were roughly dragged away by the police.

The 150 strong blockade was part of a socially-distanced action called ‘Nos Besoins’ (Our Needs)  highlighting the real needs of the world after the pandemic, such as clean seas and an ecological society, not a return to the old economic ‘abnormality’.

A Tale of 2 Coal-Fired Power Stations

While Czech rebels were celebrating the shutdown of one of Europe’s dirtiest coal-fired power stations, rebels across Europe were protesting the launch of a brand-new one in Germany.

On 4th June the state-owned Prunerov 1 power station near the town of Kadan, north-west of Prague, was finally closed down. According to a 2007 study by the World Wildlife Fund, Prunéřov was Europe’s 12th worst power station in terms of its energy efficiency and CO2 output.

Four days earlier the controversial Datteln4 power station near Dortmund had been started up, with its operator Uniper claiming it to be among the world’s most modern and efficient coal-fired power plants.

But as protestors made clear, it is still burning coal and still adding to the burden of CO2 in the Earth’s atmosphere. Greta Thunberg called it “a shameful day for Europe”.

Once again we have too many actions for one newsletter. To catch up on all the actions that have been happening around the world you’ll have to read XR Unchained. It’s choc full of beauty, courage, and inspiration.

On June 7, inspired by the recent Trafalgar Square protest in the UK, Ecuadorian rebels lay down shoes outside the National Assembly, the house of Government in the capital Quinto. Each pair of shoes represented a life lost in the struggle to defend Ecuador’s natural habitats and human rights.

Czech Republic. The sign reads: “Shell already knew it in 1986”

Bail Out The Planet

Could you help organise  XR Europe’s first synchronized European action in your country?

If your chapter, local group, or affinity group is interested, please email us at europeanactions@protonmail.com

India’s Government is planning legislation that encourages rampant industrialisation and allows companies to pollute with impunity.

XR India believes our nation must protest as one to halt these proposals and protect our shared natural resources. You can join an ongoing digital action about the draft Environment Impact Assessment (EIA) legislation or find out more on XR India’s website and Facebook.

Whoopi Goldberg has teamed up with Extinction Rebellion in a beautiful new animation set in the future. The stunning 3 minute film looks back from 2050 to show how people came together to save the world from the climate crisis.

The Condor & The Eagle

In association with XR Global Support, The Condor & The Eagle is an exciting new documentary that brings together wisdom and action from Indigenous leaders across North and South America who continue to defend their land and rights.

Online event with XR Global on the 26th of July.

See the video here and stay tuned on XRISN for Part 2!

The Eco-Fascist History of Conservation

Conservation has a dirty secret and we need to uncover it if we are serious about global justice, and transforming our relationship with nature. The history of conservation is mired in ecofascism and racism which still underpins many of its projects today.

A discussion between XR Youth and Survival International – who have worked at the frontline of this issue for many years. We welcome this conversation as a chance for XR to be challenged to grow and to listen

In the second episode of Rethinking, Barry Gills, professor of Development Studies at the University of Helsinki talks to XR Finland about radicalism, world systems and deep restoration.

As part of Global Support Trainings, the Regen 101 workshop and complimentary booklet are now available to all. The workshop consists of three online sessions covering the basics of regenerative culture.

The Global Media and Messaging team is looking for volunteers to join the content team.

Roles needed include copywriters, video editors and producers, Youtube uploaders and coordinators, and graphics organisers. We are also looking for designers to work on the Global website. Any help is very welcome!

To apply, complete this form, or email XRint-onboarding@protonmail.com

Hello rebels around the world! We’re launching the XR Global Media Library for all your media needs! The platform can be used by local chapters worldwide to collaborate globally. See here for instructions and log-ins, and join our upcoming training sessions on:

Ask A Scientist LIVE Ep3: Can we feed the world without destroying it?

Check out the excellent and inspiring Writers Rebel website. Launched on the 20th of May and chock full of essays, audio, and film – featuring some of the world’s finest writers: Robert Macfarlern, Ali Smith and Margaret Atwood. Subscribe and submit!

The Creative Hub features prose, poetry and songs about the climate crisis and possible outcomes. Don’t just read them; submit something creative yourself using your ruminations, doubts, and dreams as your fuel.

Go to xrcreative.org to see the works already posted and guidelines for submission.

If you’d like to see your art emblazoning this newsletter then please send your high resolution landscape images of roughly 2:1 to 3:1 proportion to xr-newsletter@protonmail.com.

Thank you for reading. Even in lockdown, there’s so much exciting stuff going on in the movement that we barely have time to write this sign-off. Keep up the good work! If you have any questions or queries, please get in touch at xr-newsletter@protonmail.com.

We are in a crucial phase of human history, and our Rebellion needs money to make our message heard. Anything you can give is appreciated.

There are networks no sane hacker would touch.