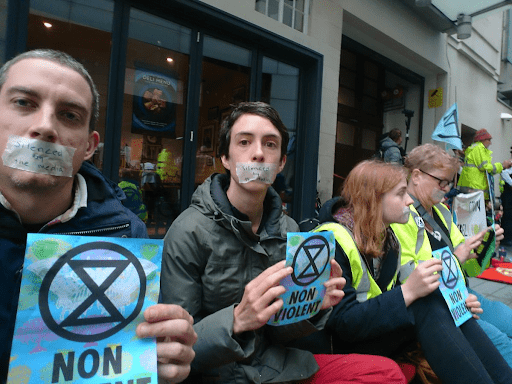 Midday at Trafalgar Square and Gail Bradbrook is on the main stage, with crowds gathered to listen in an enthralled silence: ‘This movement is like water!’ she declares. ‘You can’t get rid of us, because we will rest, regenerate and move again like water!’

And indeed we have. On day four we all flowed into Trafalgar Square, and now we are flowing back out in full, determined and joyful force!

We first hit prime time television, when Rupert Read appeared on Question Time and kept a cool head in the face of some vehement criticism.

The following morning, we were back at the stalwart of mainstream media, with a 13-hour protest outside the BBC Broadcasting House, which is yet to declare an ecological emergency. There were glue-ons, rebels on the canopy and children with tape over their mouths saying ‘silenced by the media’. Fiona Bruce came out for a chat, and every London commuter read about it in the Evening Standard.

More rebels flowed into Liverpool Street to protest outside a government Oil and Gas Fiscal Summit. The truth about this crisis is not being acknowledged at these events, and fracking is still being lauded as ‘green’  More on this story below.

In perhaps the most moving of the day’s waves of action, XR Disabilities took to Scotland Yard to demand their confiscated kit be returned to them. Plan B have written a letter to the Met detailing human rights abuses in the policing of the rebellion, including seizing disability ramps and toilets. Two rebels in wheelchairs were arrested by a somewhat excessive 12 police officers and a whole row of police cars!

Meanwhile, unsung heroes continue to graft tirelessly on the streets. One Hari Krishna – Dominic – from FoodForAll, has been serving, biking or cooking food almost non-stop since the beginning of the opening ceremony! And there are hundreds of others like him, supporting our efforts and boosting our morale. Thank you all!

Our fluidity is our strength, and is essential at a time like this. The International Monetary Fund have now said that ‘the risk of catastrophic and irreversible disaster is rising, implying potentially infinite costs…including human extinction.’

Take heart in the knowledge that we are acting in line with the science. Stay grounded and connected. Love one another. This movement is like water, and like water we will rise.

On Friday morning from 7:30AM, BBC Wales initiated the action “BBC: Your silence is deadly”. They were joined by XR groups from all over the country; XR Bristol, XR North West and XR Scotland – and XR Media Tell the Truth – to gather outside Broadcasting House and call on the BBC to meet its crucial moral duty to tell the full truth on the climate and ecological emergency.

Flags, banners, chanting and singing filled the forecourt, and rows of people sat in front of the main entrance to the BBC, where six people had glued their hands to the doors. Another entrance was left free for BBC employees to freely enter and exit the building.

Over three hours of talks followed, from XR Media Tell The Truth, scientists and farmers, as well as singers, a samba band and a visit from the Red Brigade.

Whilst this took place, two brave rebels climbed on the canopy roof of the entrance doors, which, combined with hundreds of people in the forecourt, led to a period of negotiation. When the BBC was asked to meet with XR, they responded they would next week but did not offer a time or date, nor did they specify who would be involved in this discussion. In response, the rebels gathered expressed their wish to see a representative today and an impromptu People’s Assembly took place to develop a cohesive message to deliver to the BBC.

Disappointingly, the BBC didn’t appear to discuss our demands, although they did come down to film in the morning, other media interviews were with Sky, the Evening Standard, Russian and Iranian TV. Despite this, the action received immense coverage and was felt to be a huge success!

Moving forward, Extinction Rebellion will continue to advocate for media outlets to Tell The Truth about the climate and ecological crisis, and campaign for transparency and immediate action from governmental bodies.

“It was great to see so many people here. The BBC needs to drastically improve its science literacy, and needs to integrate the climate the environmental crisis into every story; from business and transport to extreme weather  – because the climate crisis is inherently connected to everything. It needs to dispense with false balance when they give a platform to climate deniers on an equal platform to climate scientists.”

At 1pm, hundreds of people amassed to witness an Emergency People’s speech delivered by Gail Bradbrook, to question the lack of meaningful action taken by the government in response to the declaration of a Climate and ecological Emergency in April.

By 7pm, the police had fenced in the entire site from the Strand, around the Charing Cross roundabout, and up to the stage. In spite of these obstacles, the Samba band continued to hold Trafalgar Street and the literary tent event went on despite the mayhem.

On Thursday, the Global Justice Rebellion site was fully cleared by the police from 3PM onwards when they entered the site and forcefully began taking unoccupied tents. Thankfully, important equipment and most of the gazebos were salvaged (with no arrests!) although it took close to midnight until everything was evacuated.

XR Youth held a meeting to discuss potential next steps, and decided to maintain collaboration with Global Justice Rebellion Site so as to have a secure space specific for youths away from highly arrestable actions. In the meantime, XR Peace set up camp in Trafalgar Square.

Even with rebels being forced to improvise and adapt to the changing circumstances, our people and our movement are more than able to rise to the occasion. Love is all we need!

The ‘Power In Truth’ site – comprising of XR Scotland, Cumbria, and the North East of England – may have moved on from their site by the Department of Business, Energy and Industrial Strategy, but our actions targeting the fossil fuel industry have not ended.

Rebels caused disruption to the 6th Government Oil and Gas fiscal summit at Andaz London Liverpool Street by swarming the road. As XR doctors glued themselves to one entrance to the Andaz hotel, rebels from North England glued onto the other entrance in the early afternoon.

This action was held to demand that the corporations who collude with our governments stop greenwashing the fuel industry and cease fracked gas extraction. The conference does not mention the climate and ecological crisis and instead focuses on maximising corporate profit over investing in renewable technologies.

In typical XR fashion, there was samba drumming, dancing, singing, lots of flyering and outreach during rush hour at Liverpool Station. One brave rebel climbed on top of a stuck G4S van and dropped a banner saying “Climate Emergency / Westminster Wake Up”. A team of climbers had to be brought in to take him down.

An AG from the Highlands and Islands locked themselves in the street to an oil drum filled with cement, representing the locking in of a fossil fuel powered future through continued licenses to drill granted by the government.

De-escalators also did a magnificent job of keeping the peace during rush hour, as rebels attempted to engage people in conversation. Though several rebels were arrested, four remained locked-on to the oil drum. Much love to those highlanders!

On Friday morning, XR Rebels protested outside New Scotland Yard in response to the Metropolitan Police seizing and withholding access and other equipment for disabled people who are participating in the October Rebellion in London. The result of this excluded some people from participating and has made it unsafe and very difficult for those who have tried to make do.

Under direction from the government, the police are ensuring disabled people exercising their democratic right to peacefully protest are unable to use basic toilets facilities, keep warm, or have accessible shelter.

Meanwhile they arrest hundreds of environmental activists on Lambeth Bridge and claim it is to keep parliament accessible for disabled MPs.

A spokesperson for XR’s disabled rebels group said ‘we utterly condemn the police seizure of accessibility equipment exclusively for disabled activists. If the police really cared about accessibility and disabled people’s rights, perhaps they should channel more of their resources into investigating hate crimes against disabled people – which have rocketed up by 50% since 2016 – rather than arresting and charging people who are trying to protect our planet.

XR have sought to make this as accessible as possible for disabled people and the police have unfairly targeted this community. Climate change is something which is going to affect all of us, however disabled people are particularly at risk. Disabled people should not be ‘expected losses’ in the Climate and Ecological Crisis.

As we conclude day 5 of rebellion, it is important to reflect on the privilege to protest. Much gratitude and love to rebels of all ages, ethnicities, and backgrounds worldwide who are making their voices heard!

Animal Rebellion are planning to occupy Billingsgate Fish Market to protest the deaths of trillions of fish each year from oceans predicted to be functionally dead by 2048.

Billingsgate trades in 25,000 tonnes of fish every year while 70% of fisheries overfished. Animal Rebellion is calling for them to #ActNow and cease unsustainable fishing practices which are killing our oceans. The activists are instead calling on the City of London Corporation, which runs Billingsgate, and the Government to transition the market to a plastics recycling facility to contribute to the UK’s efforts to end climate and plastic pollution.

A series of peaceful actions will occur throughout the day, including a vigil for the loss of marine creatures’ lives.

James Brown, the Paralympian who bravely climbed on top of a plane at City Airport yesterday, will be appearing at Westminster Magistrates Court. Please come and show your support, love, and rage!

Why We Need a Citizen’s Assembly

Ordinary people from all walks of life learning, discussing, working through their differences and deciding how to deal with the emergency. That’s what Extinction Rebellion is calling for.

Come down to the discussion panel and hear experts and campaigners share their stories about Citizens’ Assemblies. Check the Facebook event!

“I think just showing up is saying something in itself. Anybody’s presence here is doing something – it’s support. If you think back, it’s strange how our society has gone in this direction. It went from a more spiritual point of view in the past to a factual one. I feel like we’ve lost this connection towards other generations to come. I mean now, they’re shouting about our children, our children’s children.

We’re so isolated in our minds on a daily basis, just getting food from a supermarket in plastic bags, clothes that are coming and going… it’s wrecking us. I think those rituals, of getting food, and all the stuff that’s been long, long, long lost, in our modern society, are things that keep us sane, as people. And I think that kind of stuff spreads. Sometimes, I have this crazy thought, that our own individual mental health, is a like a reflection of mother nature’s health, because it’s all connected. Sustainability, I think is the absolute most important thing.”

Helen Burnett, Vicar, arrested on Day 2 of the International Rebellion in London

“I feel we have a moral duty to re-own our links with the earth, which is deeply biblical. Unless we do so we desecrate the world for all species.”

No One Is Too Small to Make a Difference

Greta and The Giants