Coal is our heritage, not our future: Extinction Rebellion support local campaigners’ calls to halt proposed expansion of Bank’s Mining Open-Cast Coal Site with the message, “If you’re in a hole, stop digging!” 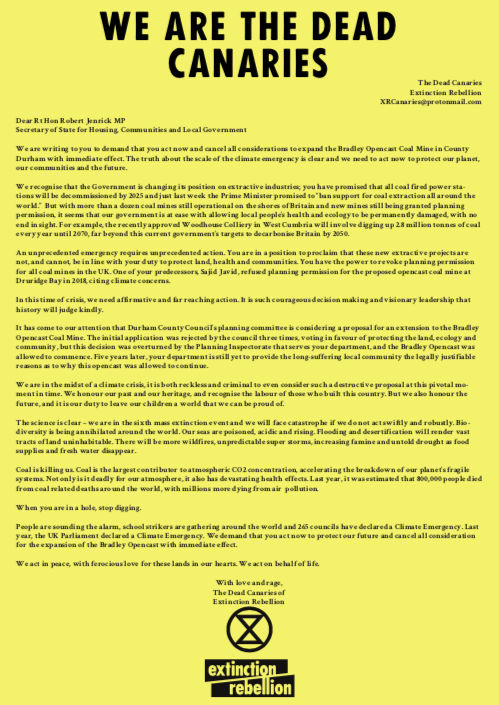 This morning, Extinction Rebellion brought the campaign to prevent the expansion of the Banks Mining Pont Valley open-cast coal site in Bradley, Durham, to the doors of the Ministry of Housing, Communities and Local Government. Imitating politicians, they sent a very visual message to its Minister, Robert Jenrick, telling him: “If you’re in a hole, stop digging!” [1]

Although Durham County Council are set to decide whether or not to allow the Banks Mining Pont Valley open-cast coal site to expand, Robert Jenrick holds the power to revoke planning permission for the expansion of the site. In 2018, former Secretary of State for Housing, Communities and Local Government, and current Chancellor, Sajid Javid, rejected plans for an open-cast mine in Druridge Bay, saying it would have a “substantial” impact on climate change. [2] Campaigners are urging Mr Jenrick, who has a record of protecting heritage buildings in the UK and Middle East, to apply the same diligence in defending Pont Valley.

The science is telling us that we need to start moving our society away from a reliance on fossil fuels – with the IPCC report concluding that we must bring about “rapid, far-reaching & unprecedented changes in all aspects of society” to avoid the most appalling consequences. [3] This means that we cannot afford to dig new coal mines,  an acknowledgement the Prime Minister himself made last month, announcing that the government have banned financial support for coal mines and power plants around the world. [4] No such promises have been made for coal extraction in the UK. With coal power stations set to be phased out in the UK by 2025, but no deadline for the extraction of coal in the UK, we’re in the midst of a dangerous coal mining scramble at the expense of our climate, local communities and natural environment. [5]

From 26th – 28th February, Extinction Rebellion will be joining forces with local campaigners to hold a three-day mass action at the Bradley open-cast coal mine site in Durham, calling on Durham County Council to reject Banks Mining Group’s plans for expansion ahead of the planning committee’s decision in early March. [6]

The local community tried everything to stop the mine getting the go-ahead two years ago, and Durham County Council refused planning permission no less than three times before being over-ruled by the Planning Inspectorate, who serve the Minister of Housing, Communities and Local Government; the role now filled by Robert Jenrick. [7] Since then, both the British Parliament and Durham County Council have declared a Climate Emergency. [8]

Fossil fuels wreak havoc on our climate, and their extraction is causing real pain, right now. Residents of Pont Valley have complained of the misery of thick black and orange dust permeating their houses and their lungs, loud explosions and constant noise from the mining machines. [9] Like community life, the mine has destroyed a sensitive habitat for a range of protected species including great crested newts, butterflies and birds – and damaged the continued prospects of the surviving species in the area.

The transformative solutions needed to address deep, regional and generational injustice do not include more open-cast mining – which provide only a small number of temporary jobs, utterly devastate the local ecosystem, and lock in further emissions. Indeed, the Durham Miners’ Association spoke out against the open-cast mine when it was initially proposed a few years ago, and have joined our call to halt the expansion. [10]

Last week, letters were delivered to the Secretary of State for Housing and Local Communities, and the sixteen councillors on Durham County Council’s Planning Committee, urging them to use their positions of influence to reject the plans for the proposed expansion of the Bradley open-cast coal mine:

A copy of the letter to Robert Jenrick, Minister for Housing, Communities and Local Government, delivered on 5th February, 2020 [11]

A copy of one of the letters to the sixteen councillors on Durham County Council’s Planning Committee, delivered on 5th February, 2020 [12]

Yesterday, campaigners in Durham protested outside Durham County Council during a cabinet meeting before moving to Durham’s Market Place, representing the thousands of local residents who also object to Banks’ planning application to extend the site. [13]

Discussing yesterday’s action in Durham, Kevin Haigh, 73, retired steelworks manager, of Birtley, County Durham, said: “We demonstrated to stop the expansion of the opencast. Burning more coal will destroy our future, and I am so concerned for my grandchildren’s generation.”

Nicholas Kasch, 32, materials scientist, of Coxhoe, County Durham, said: “If we want to avoid the most awful consequences of a heating world, we need very quickly to stop burning fossil fuels. Even looking at expanding coal extraction is insane. Our action intends to highlight to decision-makers what their choice means.”

According to June Davison, local resident and Protect Pont Valley campaigner: “I appreciate Extinction Rebellion drawing attention to what’s happening in the coalfields of Durham and Northumberland. So often we hear about oil and gas. It’s almost as though people are too incredulous to believe that coal is still being extracted and burned in the UK. If the government are serious about meeting climate targets and cutting the use of fossil fuels, leaving coal in the ground is the obvious thing to do.”

“It’s so disappointing that in the last two years we’ve written to three Secretaries of State for Communities – Sajid Javid, James Brokenshire and Robert Jenrick – and none have given a valid response to our request to stop Banks Mining digging up the Pont Valley for coal. And now Banks want to expand a site that the Secretary of State(s!) haven’t even made a decision on. It will be shameful if Durham County Council ignore their own declaration of climate emergency and approve this application”.

Jackie Scollen, local resident, says: “Durham County Council have declared a climate emergency. Now they need to show us that they mean it. Our communities were destroyed by the closure of the mines, then the industry came back and decimated our land with opencast extraction. Coal is our heritage, not our future. The Planning Committee should be out here with us.”

Alannah Travers, 23, former Durham resident and member of Extinction Rebellion, says: “If the proposed expansion gets the green light – by a council who have declared a climate emergency, and a government department unwilling to intervene – it will be a damning indication that the state is both unwilling and unable to get a grip on the climate and ecological crisis we are in. This week’s decision to vote against the expansion of Bristol airport illustrates that exerting pressure on real issues can make a difference. We hope it will do so again in this case.”

Time has almost entirely run out to address the ecological crisis which is upon us, including the 6th mass species extinction, global pollution, and abrupt, runaway climate change. Societal collapse and mass death are seen as inevitable by scientists and other credible voices, with human extinction also a possibility, if rapid action is not taken.

1.    Government must tell the truth by declaring a climate and ecological emergency, working with other institutions to communicate the urgency for change.

3.    Government must create and be led by the decisions of a Citizens’ Assembly on climate and ecological justice.

What Emergency? | Extinction Rebellion in Numbers |This Is Not A Drill: An

·   In the UK, come to one of our events, join the Rebellion Network and let us know how you can help out.

·   Start a group where you are: in the UK or around the world.

·   Check out the International

XR website, with links to the French, German, Italian and UK websites.

·   And while your time and energy are of most importance, if you are financially able to donate money, see our crowdfunder.

Extinction Rebellion emerged from the Rising Up! network, which promotes a fundamental change of our political and economic system to one which maximises well-being and minimises harm. Change needs to be nurtured in a culture of reverence, gratitude and inclusion while the tools of civil disobedience and direct action are used to express our collective power.

The post Coal is our heritage, not our future: Extinction Rebellion support local campaigners’ calls to halt proposed expansion of Bank’s Mining Open-Cast Coal Site with the message, “If you’re in a hole, stop digging!” appeared first on Extinction Rebellion.