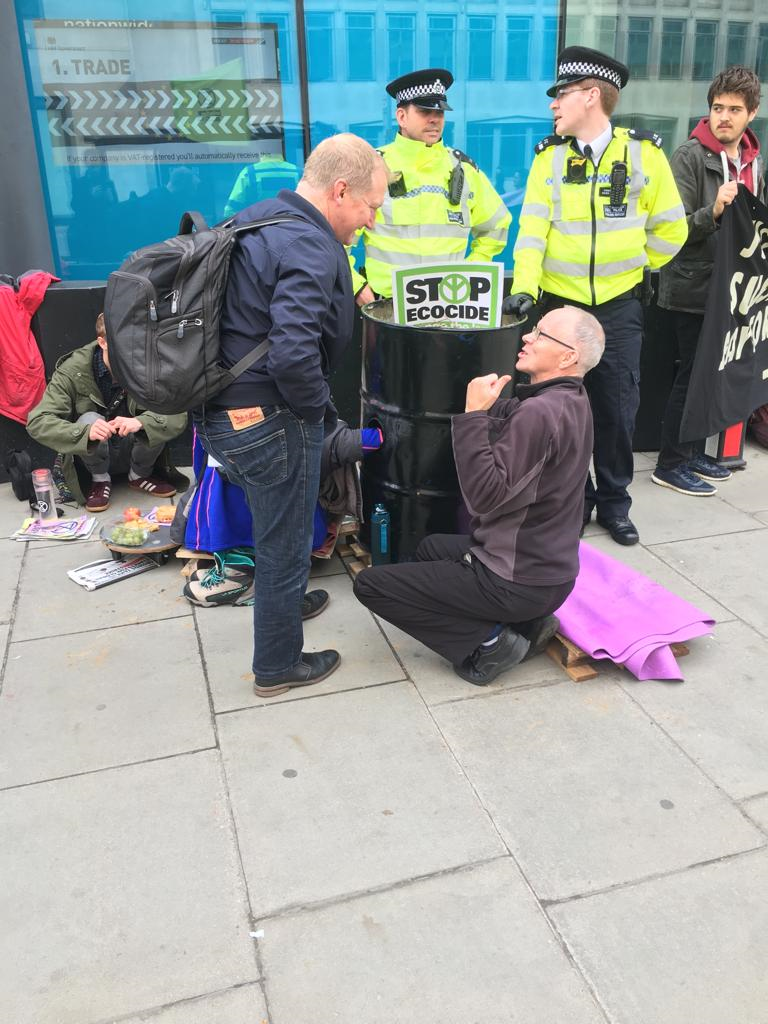 London. We Owe You an Apology (Video)

Without boats or frills, this morning, from the early hours rebels have been blocking or occupying Government departments around Westminster.

We have one simple question for them:

“What is your plan for the emergency?”

Following Parliament’s declaration of a Climate and Environmental Emergency on May 1, we have seen no truth nor action.

We are asking the following Departments and look forward to their response:

Yesterday, police confiscated cooking equipment, sleeping gear and shelter – the basic things we need to live. It is ironic that the state would deprive us of these life-sustaining essentials whilst we demand the government take action on climate breakdown.

At which Extinction Rebellion will convene a discussion around our constitutional crisis, the future of democracy and Citizens’ Assemblies; with reference to how we tackle our Climate and Ecological Emergency.

With 6 months having passed since Parliament’s declaration of Climate and Ecological Emergency and with more than half of the UK’s principal local authorities having now declared a climate emergency (168 1st & 2nd Tier Councils), we ask the government “What’s your Plan?” (it is an emergency, and deserves an emergency response).

‘While we squabble over Brexit, the planet is burning’

“I’ve campaigned on the climate crisis for years now. I’ve written to MPs, I’ve signed petitions and I’ve minimised my own carbon. Emissions are still rising. Non violent direct action feels like the only thing left.

“I don’t want to be doing this, I just want the government to listen to the science and act. This emergency, is beyond traditional politics – we want to know what Government Departments are doing to face this climate and ecological emergency. The moment to act is now, not 2050.

“Our third demand, for a Citizens’ Assembly is really important to me because it is a practical suggestion as to how to move forward. The scale of the change we need is so great it needs to be truly democratic, and a Citizens’ Assembly would revitalise our current political system, which is not working – with party politics, short term elections thinking and undeclared money. A Citizens’ Assembly would carefully circumvent all that, and get the positive changes we really need for a zero-carbon society.”

As part of the Extinction Rebellion actions in London, we will be creating a fledgling forest with 800 potted native trees

in Old Palace Yard.With this symbolic action we will be calling on the government and MPs to plant billions of trees across the UK, and support the planting of trillions more

“Global tree restoration is one of our most effective climate change solutions to date.” – The Crowther Lab

Trees will be dedicated to MPs, who will be asked to collect their trees, and use them to begin radical reforesting of the UK. At least 6 MPs will be visiting to confirm their support, including Caroline Lucas MP, Debbie Abrahams MP, Ed Milliband. Action calls on government and MPs to plant billions of trees across the  UK, and support the planting of trillions more globally.

Science presenter and campaigner Matthew Shribman said: “The UK is one of the most deforested countries in Europe, but the government only aims to increase tree cover by around half a percent. That’s not even enough to absorb an hour of global emissions! It’s like giving someone a get well card when they need emergency surgery. To rescue life on Earth, the world needs to plant trillions of trees now.”

With scientists telling us we need to plant 1 trillion trees to absorb the last 10 years of carbon emissions, and daily news of climate breakdown across the world, this action will demand the UK government starts urgent restoration of our ancient forests. The UK has enough plantable land for billions of trees, but has committed to just 11 million new trees by 2022 (barely a 0.5% increase). At the very least, the UK should commit to be in line with Europe, by tripling our tree cover.

Forest guardians will be on site to care for the trees, and those not taken by MPs will later be planted in the West Country, and all pots will be reused.

Matthew Shribman MChem (Oxon), an Irish-British science presenter focused on communicating the climate and ecological emergencies will be available for interviews. His videos have had over 25M views, and his #NoBeef campaign has won support around the world, from top scientists to Paul McCartney.

Time has almost entirely run out to address the ecological crisis which is upon us, including the 6th mass species extinction, global pollution, and abrupt, runaway climate change. Societal collapse and mass death are seen as inevitable by scientists and other credible voices, with human extinction also a possibility, if rapid action is not taken.

Extinction Rebellion is an initiative of the Rising Up! network, which promotes a fundamental change of our political and economic system to one which maximises well-being and minimises harm. Change needs to be nurtured in a culture of reverence, gratitude and inclusion while the tools of civil disobedience and direct action are used to express our collective power.