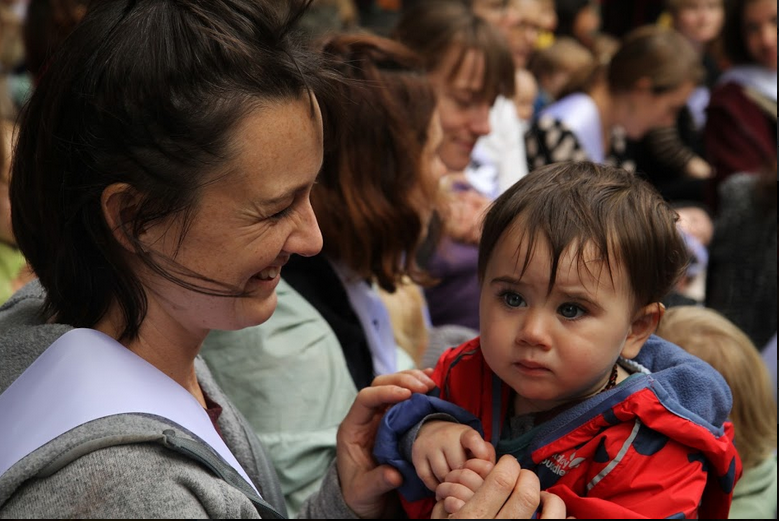 Rebels in London are moving from strength to strength. The blanket ban on protests by the police has not been met by frenzy and rage, but an unequivocal groundswell of love.

Thousands peacefully and kindly gathered in Trafalgar Square for rousing speeches and expressions of gratitude, before a mass people’s assembly was held (see the results below). In the face of draconian opposition, we leaned into the wisdom of the crowd.

Meanwhile, families came to the fore, with humility and depth from XR Mothers, and raw spirit from XR Youth, in actions targeting YouTube and Google.

It is now imperative that these outlets accurately inform us of the greatest threats to our existence, and cease favouring vociferous climate deniers. In spite of a heavy police presence, moments of truly harmonious song arose at both locations, giving each action a powerful aura of fearlessness.

We took our fearlessness from the streets to the courts, where XR lawyers applied for a judicial review of the disproportionate ban. It was accepted, which means we will now have a platform to prove the ban’s illegality.

The ban has sparked a number of high profile arrests, including that of journalist Geroge Monbiot and Green Party Councillor Jonathan Bartley. Our sweat and tears have stretched the Overton window so wide that even elected officials are now breaking the law!

We are making great strides at phenomenal speed. We should feel immensely proud.

And to top things off, yesterday 100 celebrities – Sienna Miller, Jude Law and Mel-B among them – published an open letter, acknowledging their own hypocrisy, and imploring the media to tell the truth about the Climate and Ecological Emergency.

“Thousands of ordinary people are risking their freedom by taking part in non-violent civil disobedience” it read. “We’ve been inspired by their courage to speak out and join them…we beg you to do the same.”

To all those who have a voice, we beg you to speak out!

To the beautiful rebels in London and everywhere, you are marvelous! We are absolutely all we need.

For a visual roundup of everything covered here and more, XR TV have got your back.

The People’s votes are in!

Thousands participated in a people’s assembly in Trafalgar Square on Day Ten. Small groups came together to share and listen to each other, responses from each group were then pooled and collated.

The top five issues, as we go forward during this Rebellion, from the assembly:

Searching for a conscience…

Given what we know today about the climate and ecological emergency, new mothers are wrestling with overwhelming emotions. They are full of abundant love for their infants, while at the same time they are gripped by fear about whether the world their babies grow into will be a habitable one.

Sitting amongst the breastfeeding XR Mothers today, one could feel the full force of these two emotions.

The action, in which around 150 mothers sat outside Google UK, had a stillness and poignancy. There was only one banner, echoing Google’s own purported standards – ‘Do the Right Thing’ – and each woman wore a simple ‘Their Future’ sash.

Clustered on a pavement, the rebel mothers seemed at once so vulnerable, but at the same time incredibly strong, united by a palpable sense of sisterhood.

There was relatively little noise, except when they broke out into sweet song. Many women were moved to tears.

When they were ready, they packed up with dignity, and left in their own time.

The mothers were protesting the gross environmental hypocrisy of search engine Google. Google assures us that it is committed to sustainable policy, whilst it invests fat wads into campaigners against climate science, to avoid being snared by obscure libel laws.

Enough is enough, say XR Mothers! If our children are to have a remote chance of living long, healthy lives, Google must stick to its own dictum: ‘do the right thing’ and bring all business practices in line with the truth.

As a nursing parent, it is easy to feel helpless to take any action against the future awaiting your children. XR Mothers have done incredible work this October to make a space for those rebels who may feel both the most distraught, and the most powerless.

XR strives to be an inclusive movement, and actions like these are shining examples of that.

XR Mothers, we have the deepest respect for you.

To find out more, or to get involved with future actions, head to XR Families.

Just around the corner, the next generation of rebels, XR youth, took on YouTube’s Headquarters. Five brave rebels climbed on top of the entrance, while a large crowd blocked the road in front.

With this first action at YouTube, XR Youth are calling on the platform to tell the truth! Young rebels urge YouTube to stop amplifying climate scepticism, by promoting huge numbers of videos which deny the ecological and climate crisis. With 97% of scientists agreeing on the crisis, we need to listen to the science.

The time is NOW, to get with the facts and tell the truth!

As we are sadly becoming accustomed to, within less than an hour, the police responded to the peaceful protest with intimidation. Kettling protestors, they rushed in a JCB, at full speed and with a complete disregard for safety, to take young rebels off the roof and arrest them.

Mothers with babies were pushed aside under the watchful eye of earth protectors and independent journalists.

Watch how it started and how it all unfolded.

The media followed avidly as Extinction Rebellion protests went on in spite of their ban.

In the courts, XR’s application for a judicial review was covered by the Guardian, quoting Green Party MEP Ellie Chowns who described it as an ‘existential crisis’ for political protest in Britain.

The Independent and Huffington Post led with Greta’s commentary on the ban asserting that ‘the rules must be broken’.

The Daily Mail provided live updates on continuing protests in Trafalgar Square, and reported on breastfeeding mothers who staged a sit-in outside Google’s London HQ, even though it is now illegal for more than two protestors to assemble,

France 24 and The Brussels Times covered the legal challenge and protest outside YouTube and Google, while few actual events were covered by international news.

Beyond this, the media continued to write and tell personal stories from the protests. Vice ran an article about how Hare Krishna donated vegan stew to hundreds of rebels, ITV wrote about a Mum that had gone ‘off-grid’ to live in the woods, and the Metro published a guest piece from a minister who got arrested in the protests and felt that XR was ‘consonant with what the church ought to be’.

Of serious interest was the coalition of celebrities that endorsed XR, describing how the ‘stories that you write calling us climate hypocrites will not silence us’. Signatures on this letter included Jude Law, Benedict Cumberbatch, Lily Cole and Radiohead’s Thom Yorke.

The media are likely to amplify legal proceedings over Section 14 once they ensue, giving us an awesome opportunity to articulate our goals and demands.

We’re going on a trip to Gatwick Airport! With a light-hearted, informative vibe, let’s give a wake-up call (again) about the urgent need to reduce the number of flights, not expand airports.

We call on all passengers, pilots and friends to join us in tackling the climate and ecological emergency.

Come incognito and await the signal at 11am to reveal yourself!

Performers, musicians, clowns, singers, party hats welcome. We will be handing out leaflets encouraging people to play their part in what lies ahead. If inclined, some people may like to indulge in a bit of mischief but the intention is not to cause people to miss flights.

Join the Telegram info channel on this link

Suits and Ties against Ecocide

Dress smartly and meet up at Department for Work & Pensions at 4.30 pm. Together we will march to Trafalgar Square, where more will join us in a super group of working professionals!

Please come in your finest work attire, with a white sash, a placard stating your profession, job, vocation, caregiving role. Let’s show the world how varied our rebel movement is, because we are not all crusties.

Route is still a secret… but promises fun cycling around London! Bring flags, speakers, colourful stuff and make yourselves known if you can bring a cargo bike/ carry supplies or a PA!

A coming-together of hearts and minds. An opportunity to practice healing, grounding and restorative practices of different faiths from around the world. With a unique line-up of faith leaders, we will take a critical moment to pause and reconnect with sacred nature and the joy of life. Please bring a candle and a lantern or jar.

“I’m here to support the people who are talking about food scarcity in the future and also to represent the West Indies where my Mum and Dad come from, the island of Grenada. ‘1.5 degrees to survive’ is the slogan in the West Indies to make sure that climate change doesn’t decimate the region.

“It helps if you’ve got a bit more money so that you can actually protest, and if you’re working-class you’re not likely to be able to take this much time off. There’s no doubt there is a middle-class vibe running through XR, there’s no point lying about that.

“The Samba band generally bucks that trend because music is a much bigger melting pot than in other parts of XR.

“I’m not going to get arrested, it’s that simple. As a black person I can’t afford to get arrested. So part of the reason I joined the Samba band is that it is primarily non-arrestable.”

We are receiving amazing human stories and we want to know yours. To read more – or to write your own – join our Facebook group.