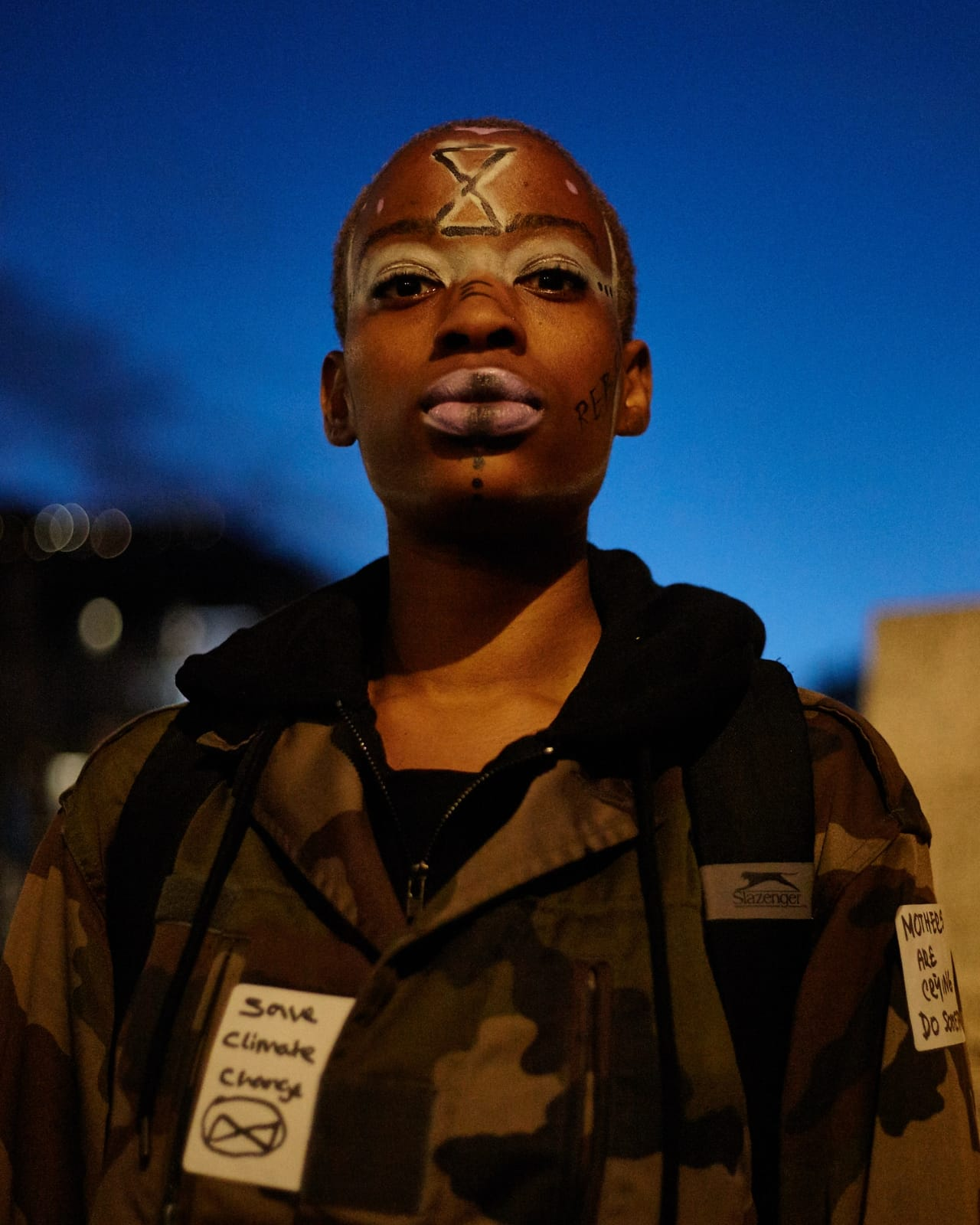 Day four of the Rebellion saw rebels acting out of love and extraordinary courage. XR New York shut down Time Square with a lime-green boat, UK rebels descended on London City Airport and even climbed onto a plane, and Berlin switched up their tactics to keep disrupting the city.

Rebels in Rio and Mexico City performed dynamic, creative expressions of a natural world under threat, and rebel organisers across Colombia are hitting their disruptive stride.

With every day that passes, the rebel spirit seems to swell and surge, screaming its refusal accept and ecocidal system any longer.

We are facing a planetary emergency. This is the biggest challenge humanity has ever encountered, a threat to our very existence. To have a chance at surviving, we must give everything we can.

Right now, the challenge is to convince people everywhere that this is real and it’s happening right now. When we come together in love for the planet and each other, we are unstoppable.

All around the world, people are waking up to their own power and choosing to rebel. Can you imagine how loud we could shout if all of us, every single one, found our voice?

The time is NOW for you to choose: extinction or rebellion?

If you’d like to help, please check out our guide and learn more about XR.

As we enter this crucial phase in human history, our Rebellion will need money to make sure our message is heard. Anything you can give is appreciated.

Action Highlights (Back to top)

Four days of rebellion, over 1000 arrests (including an ex-police officer and many grandparents), 80 tonnes of equipment confiscated by the police, and still plenty of vegan curry and fire left in rebel bellies!

This rebellion is requiring London rebels to be more agile than last time, so they are considering their next move carefully (stay tuned on the broadcast channel).

Police continue to reach new lows to break our resolve: this time a rebel in an electric wheelchair had his power pack confiscated. Repeated cases of treatment like this has prompted a formal legal complaint from the charity Plan B.

Despite the police’s very best efforts, spirits were high during an impromptu march, 1000 strong, from St James’ Park to a new safe place for tired rebels to lay their heads.

The biggest story of the day was not in Westminster, but in London City Airport where brave souls disrupted with glue-ons and lock-ons, with one rebel boarding a flight and disrupting with the truth on the emergency, and Paralympian James Brown actually climbing on top of a British Airways plane. Check out his emotional live stream from on top of an aeroplane. ​

In other news, over 400 MPs responded to our reforestation project and came to collect trees from our temporary forest. Check out this short video.

For the London Newsletter with news from all the sites, click this button:

London rebels, check out our Rebellion Needs page for practical ways you can help rebels on the ground right now and other essential info.

XR NYC shut down Times Square yesterday with the help of a large lime-green sailboat that cruised in specially for the occasion. New Yorker rebels swarmed the boat as soon as it moored, attaching themselves to the bow like barnacles using chains and super glue.

Atop the vessel, superglued by the feet and handcuffed to the mast, was 16-year-old Nathaniel Walcott. The NYPD were forced to close off the entire square for over two hours and 62 fearless rebels were arrested.

To pull off the audacious blockade, a decoy protest was launched at the nearby ‘Fox News’ headquarters. 100 rebels, buoyed by the freshly-formed XR NYC band, arrived at the news tower just as the boat dropped anchor over in Times Square.

As night fell, Arrestee Support were waiting outside the local jail with vegan curry and hot tea for the released rebels.

Thursday saw new tactics being used in Berlin, with the focus moving from large actions to small and spontaneous swarms all across the city – the #PlanBee.

There were glue-ons at the German Ministry for the Environment and at the entrance of the CDU party headquarters. Here, the swarming tactics proved their effectiveness, as police attempts to close off the area failed, and 150 singing and chanting rebels reached their goal.

300 rebels marched from Kreuzberg and their blockade of the super-busy Kottbusser Tor was still going strong by early evening. There was a human chain outside the Bundestag and numerous other swarms of #PlanBees across the main districts, including 200 rebels outside the Ministry of Transport.

Rebels embarked on an epic hike from Weissensee to Hermannplatz in Kreuzberg, spreading the word as they went. Meanwhile at the Natural History Museum, 100 rebels demanded a future where wildlife can still be found outside of museum exhibits.

While the blockade on the Jannowitzbrücke Bridge was eventually cleared peacefully, rebels at the Marschallbrücke Bridge near the Reichstag are still going strong.

Viennese rebels stick to the Planet

Several Austrian rebels superglued themselves to a 3-meter disc depicting a bleeding Earth. Police began removing rebels with unusual respect and restraint after about three hours. 70 rebels were arrested.

On Wednesday, 250 rebels transformed Vienna’s Saltzor bridge into an urban garden. They installed wooden clocks symbolically showing 12:05, while rebels dressed as endangered animal species entertained the crowd with a dance-performance.

Rebels in Rio staged an ocean-themed action yesterday. An oily rebel with plastic straws glued to her legs lay on a blue tarpaulin decorated with sea-life. The action draws attention to controversy surrounding the auction of oil ‘blocks’ near the Abrolhos Archipelago, a group of islands surrounded by coral reefs off the Southern coast of Brazil’s Bahia state.

Campaigners claim a lack of environmental studies of the region, which has the largest biodiversity in the South Atlantic and includes whale migration routes. Brazil’s Institute of Environment and Renewable Natural Resources (Ibama) warns of possible ‘physical, biological and socio-environmental’ impacts that could affect the entire area, including the reef complex.

Perhaps appropriately, the region’s name ‘Abrolho’ is Portuguese for “Open your eyes”.

Mexico City was treated to a carnival-style march yesterday, with scores of rebels carrying XR flags and banners declaring the climate emergency and biodiversity loss already upon us. Many were dressed in fantastical costumes, including leering demons accosting beleaguered winged animals.

The procession stopped at a busy intersection, were passers-by were entertained with a theatrical dance performance involving a ‘Mother Earth’ figure facing off against numerous demons passing round a miniature inflatable Earth. Some of the crowd even joined in with the dancing and all involved seemed in good spirits, whether demons, creatures of nature, or curious pedestrian onlookers.

Encouraging news from Madrid! Members of XR Spain met with Teresa Ribera, Minister of Energy Transition and Environment, to present their five demands, after a week of peaceful protest outside the Ministry’s doors.

Rebels announced that they will continue to monitor the government’s action (or rather in-action!) to stop climate change and will intensify protests until all demands have been met.

In other news, six rebels all in white chained themselves to the rails of Retiro Park and sent the keys to the Ayuntamiento (town hall) to show that it is the responsibility of our leaders to come to our aid in these times of global crisis.

XR Unchained (Back to top)

See more of the beautiful and courageous action from the International Rebellion in XR Unchained. There is so much to tell.

Dozens of brave and brilliant rebels in Gambia took part in a walk out and roadblock. See here for a short but hugely inspiring video. Their next action is planned for Monday 14th.

Colombian rebels held solidarity actions across the country for fallen Earth defenders, including this one in Medellin and a minute’s silence at a roadblock in Bogota. Here’s a video from XR Armenia Quindio.

In Vienna, rebels stage a blood-spattered die-in on their blocked road.

A German rebel offers to share his snack with the police.

Announcements (Back to top)

IST exists to connect XR branches across the world, for a more global approach to the planetary crisis we face.

Based outside of the UK and interested in getting involved in an International Support working group? Get in touch!

‘I am here because I want to try and save the future for my three younger brothers, and my own future. We’re all people from different backgrounds and before this we didn’t know each other, but one cause makes us come together like a big family.

It’s really nice – I’ve found ways to express my differently as part of XR, especially as part of the Art Blockers. It just lets me be myself more.’

We are receiving amazing human stories and we want to know yours. To read more – or to write your own – join our Facebook group.

Thank you for reading! Stay strong, rebels, your energy is so valued.

If you have any questions or queries, please get in touch at xr-newsletter@protonmail.com.

As we enter this crucial phase in human history, our Rebellion will need money to make sure our message is heard. Anything you can give is appreciated.