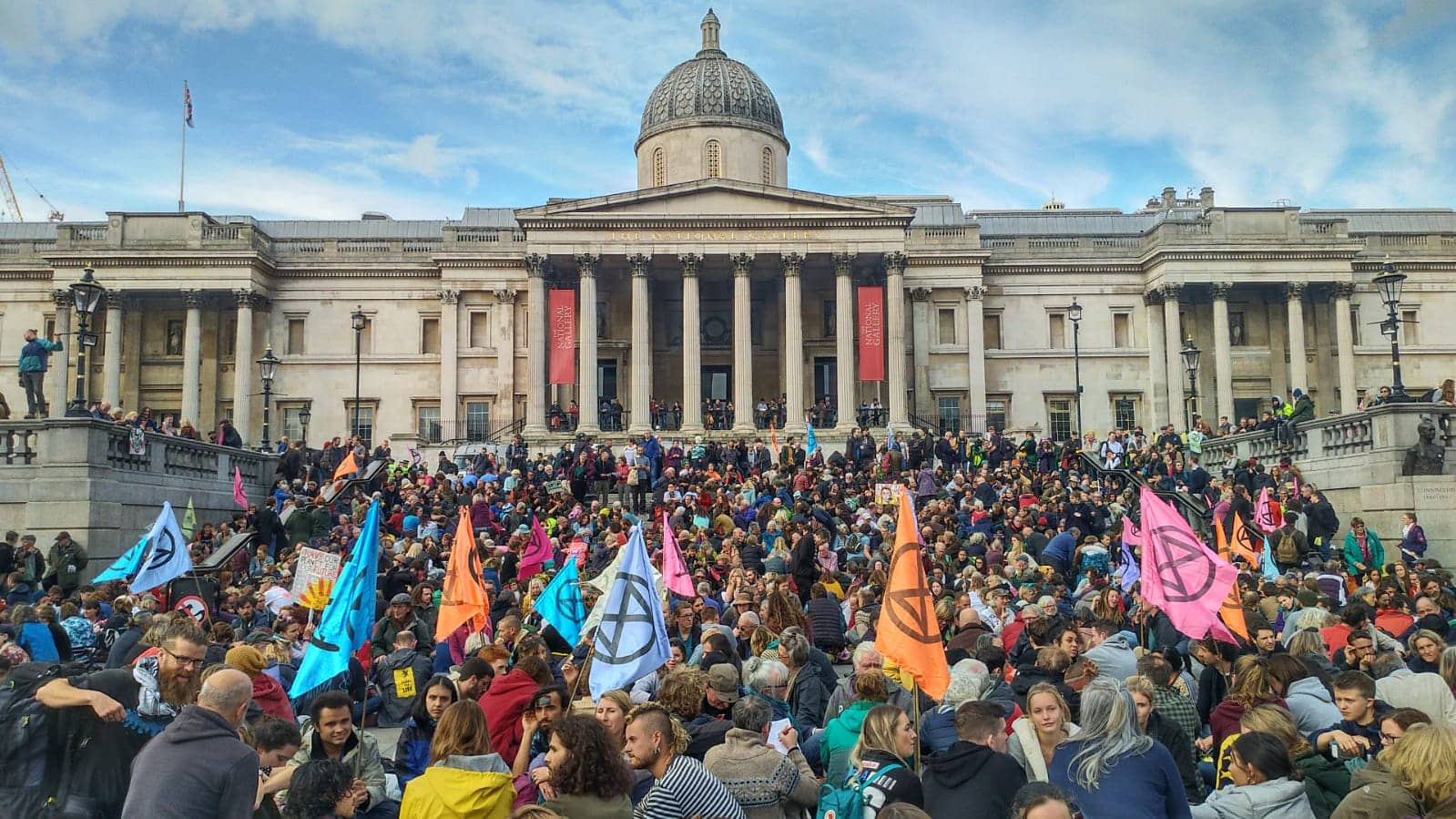 This morning, members of Extinction Rebellion climbed onto trains at Stratford, Canning Town and Shadwell. At Canning Town, members of the public pulled two rebels from the roof of the train.

Whatever your thoughts on the action, this footage was highly distressing to watch – and must have been much more so for anyone present in person.

It’s important to acknowledge that the distress did not start with the footage: this action had been announced on Tuesday, and was received with overwhelming opposition and consternation from those in our movement, both regarding the nature, location, and timing of the action. This concern was communicated to the planners of the action – a very small group, which did not participate in ‘national level’ Rebellion decision-making bodies. They issued this statement in response .

XR’s current organising ethos is that anyone can carry out any action in the name of XR, provided it doesn’t conflict with our ten principles and values. Following two similarly controversial proposals in April and over summer, the process for ‘national’ actions has been revised such that proposals must pass through scrutiny from other teams before going ahead.

But, as stated, the group involved in today’s action was operating at the grassroots level; they received the feedback from the wider movement and made their own decision.

In short: very few people in XR wanted this to happen, but the ‘post-consensus’ organisational model which we currently employ is such that it happened all the same.

Our fifth value is “that we value reflecting and learning”. ‘Post consensus’ organising is undoubtedly an important part of what has made us such a dynamic, fast-growing and vibrant movement. On the other hand, there are clearly serious flaws in a system that gives rise to pain such as many of us feel today.

This movement is made up of people who pour their energy and hopes into this cause and who have been left feeling disrespected, powerless and unheard. It’s clear we need to take serious time to learn from what went wrong.

As we begin to think about why we are where we are, it’s vital to remember the bigger picture. As with earlier controversial proposals, this action was conceived and carried out by incredibly courageous individuals, willing to face prison sentences, and motivated by the same deep fear and profound love that drives so many of us to do what we do.

It’s no less through love and fear, and due to the same conditions of oppression that we face ourselves, that we saw such a disturbing reaction from some of those on the platform at Canning Town. These were commuters trying to get to work so they can support their loved ones. We recognise that disruption at Canning Town affected those already suffering the hardships of a toxic system – those who are the most at risk from the effects of climate and ecological collapse.

Our world is in grave danger. Even within XR itself, outlooks vary: from deaths in the millions to imminent civilisational collapse to human extinction. Those who acted today did so out of love for this planet and all of the life, human and otherwise, that it sustains.

We’re still figuring out how to work together to prevent or mitigate catastrophe, but in the meantime let’s not forget the love that brings us together. And even as we take issue with the actions of others – be they members of the public, public commentators, or members of XR – let’s not forget that love.

Moving forwards will bring challenges – it was always going to. But let’s remember why we’re here.

The final day of rebellion will be a chance to share the highs and lows from all we’ve been through in this rebellion and in this emergency. We come together in humility and honesty, to share our achievements and also acknowledge what we need to learn from, and where we wish to go next.

We will begin with the ‘Red-Handed Rebellion’, and follow on to a transition ceremony, concluding at Victoria Tower Gardens.

Here are the details:

We are asking the government: ‘WHAT IS YOUR PLAN for the Climate and Ecological Emergency?’

We deliver our Emergency People’s Speech to those who have the power to act.

Together we will march in a solemn, unified and peaceful procession through Westminster and enact our Red-Handed Rebellion…

2.00pm – site-based groups meet at their original site (as marked on the first day of Rebellion)

2.30pm – each site moves in procession from their original site to the Global Justice site (Victoria Tower Gardens)

3.00pm – a ceremony of “Harvest” to mark our transition moment in Rebellion

The past 12 days have attracted attention from around the world. The Climate and Ecological Emergency is under the spotlight like never before. More than 3,000 people have put their liberty on the line by being arrested.

We are gathering to reflect the raw journey we have been through and to take a further step towards our vision of true reconciliation.

We come together in humility and honesty, to share our achievements and also acknowledge what we need to learn from, and where we wish to go next.

We are moved to acknowledge our diversity and our differences, and to apologise to the voices who are being marginalised and excluded. And to acknowledge that we still have not brought everyone with us on the issue of the climate and ecological emergency.

This is a moment to ground ourselves, to sow seeds for the future and take this back to towns and cities throughout the country and around the world.

The ceremony will be marked with time for song, reflection and listening. Gather in your site groups at 2pm and proceed to join us at Buxton Memorial Fountain, Victoria Tower Gardens, Millbank at 3pm.

Bring any objects or writing which reflect your journey in Rebellion, and to deepening a commitment to solidarity and interdependence.

This event is open to anyone – however much you feel that you have been part of the Rebellion and whatever your views on the movement.

The post Today’s tube action: how it happened appeared first on Extinction Rebellion.